What is Janus v. AFSCME?

The U.S. Supreme Court has ruled that no public employee in the country can be forced to pay dues or fees to a union. This affirms a constitutional right for millions of government employees nationwide. You now have the right to choose to pay union dues or to keep your hard-earned money. To stop paying money to your union, click here now.

Info About Your Rights 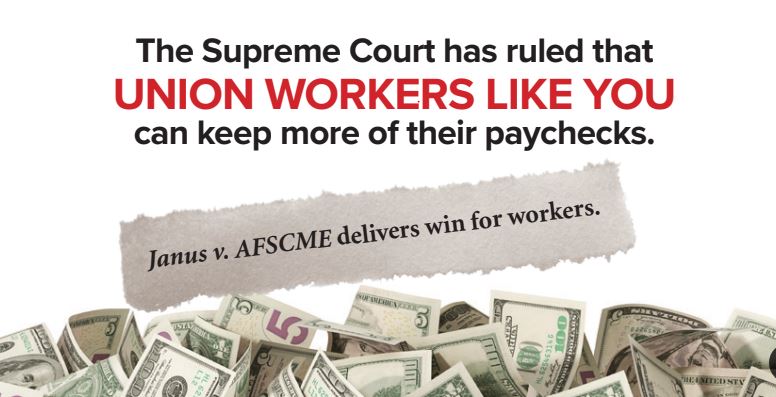 The Janus case is simple.

Public employees can no longer be forced to financially support a union that they do not want to be members of. Generally speaking, workers are still covered under their bargaining agreements (this is known as “exclusive representation,” and it is something unions fight for), and the contract will still apply.

Approximately 5 million unionized government workers in 22 states are affected by the Janus decision.

Currently, 28 states already grant the “right to work” without forced unionization to most or all public workers, while about 5 million workers in the 22 states without these right-to-work laws still had to pay their unions regardless of whether not the unions are serving their best interests. The Janus case changed that — all public employees now have a choice.

Government unions have sent their own members to collection agencies for deciding to stop paying dues.

One union said it would use “any legal means” to combat members who want to leave.

Is there any legal support available to me, if I need it?

MAYBE. If you have experienced a challenge in exercising your newly restored rights under Janus v AFSCME, or if you believe you may have legal recourse after suffering any level of recrimination after resigning from your union, assistance may be available to you. Please contact us at 401-429-6115.

Workers could technically already opt out of union membership, but they still had to pay to support union activities.

It’s true that unionized public employees could already choose not technically to be members of the unions organized in their workplaces. However, these employees were still forced to financially support the unions by paying them what’s typically called an “agency fee” — supposedly for funding general operation costs for the union, but often used for political purposes some members do not support. A ruling in favor of Janus means that public employees can no longer be forced to financially support unions that they do not want to be members of.

Teachers don’t need a union to have insurance.

Liability insurance can be purchased individually, and there are many options available for employees who choose to resign their union membership, including the Association of American Educators, who already insure thousands of teachers nationwide.